Reflections on the Connecticut School Shooting

This past week our nation was shocked by the horrific shooting at Sandy Hook Elementary School.  As pictures of the victims and stories of the shooting make their way through the news cycle, I'm hit again and again by waves of shock and grief and outrage and sadness.  It's almost too much to take in.  In particular, this shooting is outrageous because the majority of the victims were 6-7 year-old's.  I've been thinking about this shooting a lot, partly because it's difficult not to, and partly because I taught at church this past Sunday and felt compelled to address the shooting.  Below are some of my reflections as I've thought, prayed, and grieved over this tragedy.

Posted by Nathanael King at 1:40 AM No comments:

"Spiritual, But Not Religious" 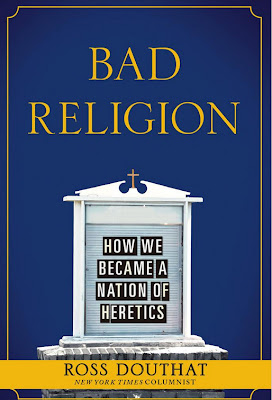 In his recent book, Bad Religion:  How We Became a Nation of Heretics, Ross Douthat exposes the spiritual roots of America's political, economic, and moral decline.  He argues that the problem is not too much religion (as the atheists would argue), nor is it intolerant secularism (as many Christians believe).  Instead, the problem is bad religion:  the slow-motion collapse of traditional faith and the rise of a variety of pseudo-Christianities that stroke our egos, indulge our follies, and encourage our worst impulses.

The problem lies in the fashionably "spiritual, but not religious" sentiment espoused by many teachers including Deepak Chopra, James Redfield, Eckhart Tolle, Paulo Coelho, Neale Donald Walsch, Oprah Winfrey, and Elizabeth Gilbert (author of Eat, Pray, Love), and (I might add) Yann Martel (author of Life of Pi).  Douthat examines the roots of this view and finds that their "creed" shares the following four beliefs:
These four beliefs compose the core of the bad religion that has been so fashionable as of late and, according to Douthat, is the core of America's spiritual woes.  I suspect that many well-meaning Christians might even be tempted to believe various forms of these beliefs.  I think of the popular Christian authors Rob Bell, Brian McLaren,William P. Young (author of The Shack), and Donald Miller (author of Blue Like Jazz:  Nonreligious Thoughts on Christian Spirituality), each of which espouse one or more of these beliefs in a Christianized form.

My church has been teaching through the book of Colossians, and I've been impressed by the similarity of the cultural pressure faced by the church at Colossae and the American church.  For both the Colossian church and the American church, the problem was not an outright denial of religion, but a new form of religion that seemed spiritual and tolerant.  The problem was and is syncretism:  the blending of religious ideas and the denial of claims to exclusive truth.   The problem was and is an over-individualization of spirituality detached from the organizational church and orthodoxy.  In response to this, Paul encouraged the Colossian believers to be faithful, knowing that Christ is supreme.  He forcefully announces the supremacy of Christ stating,


He is the image of the invisible God, the firstborn of all creation. For by him all things were created, in heaven and on earth, visible and invisible, whether thrones or dominions or rulers or authorities—all things were created through him and for him. And he is before all things, and in him all things hold together. And he is the head of the body, the church. He is the beginning, the firstborn from the dead, that in everything he might be preeminent. For in him all the fullness of God was pleased to dwell, and through him to reconcile to himself all things, whether on earth or in heaven, making peace by the blood of his cross.  (Colossians 1:15-20)