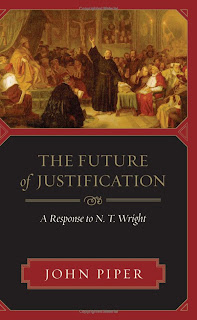 Yesterday I received a new book by N.T. Wright entitled Justification: God's Plan and Paul's Vision. This book is the most recent addition in an ongoing debate between John Piper and N.T. Wright on the issue of justification. In 2007, John Piper wrote a book entitled The Future of Justification: A Response to N.T. Wright. Since Wright had never written a full treatise on justification, Piper was responding to a number of things Wright has written including his books, What Saint Paul Really Said, Paul: In Fresh Perspective, Wright's commentary on Romans, as well as a number of articles Wright has written. Wright's most recent installment in the debate is a focused treatment of the doctrine of justification, including a section which details his exegesis on important selected passages of Scripture.

N.T. Wright is probably the most important theologian and biblical scholar of our times. He's written a number of massive tomes, the most important being his projected 6-volume series, Christian Origins and the Question of God. In addition to being a prominent biblical scholar, he is also pastoral in his approach as he is the presiding Bishop of Durham. Piper, on the other hand, is the influential pastor of Bethlehem Baptist Church in Minneapolis, Minnesota. He is probably the best model of a pastor that I know, and has written some scholarly works, but for the the most part has focused on popular level works. The scholarly works he has written tend to be idiosyncratic and so are not widely regarded in academic circles. In terms of their scholarly influence Piper is clearly the underdog. I don't say this to be demeaning to Piper. On the contrary, I believe that Piper has some good points that need to be taken seriously. One reason I respect him so much is that he is an excellent pastor who thinks it is important to interact with the highest levels of biblical scholarship.

Wright initially responded to Piper's book in an interview saying, "Piper’s criticism is very interesting. I warmed to him. He sent me a copy of it with a charming hand-written dedication, so on. He has clearly bent over backwards to try to understand where I and others are coming from. Sometimes he does and sometimes he doesn’t. He nearly gets to the point where he sees what I’m trying to say, and then the old worldview reasserts itself and he just can’t see through those lenses. I don’t want to say this patronizingly, but it is very frustrating." Wright has a tendency to write-off people who disagree with him as simply misunderstanding him. However, having said that, when I read Piper's book I was continually struck by the thought, "I don't think that's an accurate assessment of Wright's view." Wright was recently interviewed regarding his newest book which can be accessed here for those interested. I have been unable to find a response by Piper to Wright's newest book. If anyone finds a response please leave a comment.

In any case, it's clear from the reviews that Wright's newest book is an important contribution that should help clarify the issues, and could possibly push all of us towards a closer reading of Scripture. Scot McKnight said of Wright's book, "Tom Wright has out-Reformed America's newest religious zealots--the neo-Reformed--by taking them back to Scripture and to its meaning in its historical context. Wright reveals that the neo-Reformed are more committed to tradition than to the sacred text. This irony is palpable on every page of this judicious, hard-hitting, respectful study."

I'm excited to read the new Wright book and watch as these two great pastor/theologians spar. One thing that makes these books a joy to read is the irenic spirit that both Piper and Wright continually exhibit. This is how an issue ought to be debated among Christians. Everyone who wants to understand the doctrine of justification by faith ought to read these two books.
Posted by Nathanael King at 10:05 AM