Love Wins, But Not At the Expense of Truth 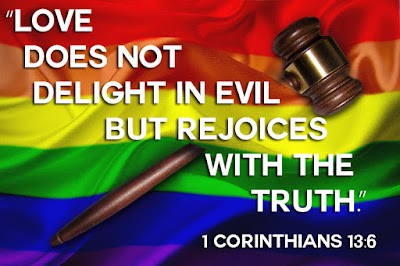 Today the Supreme Court redefined marriage.  That's what the news says anyway.  For those who believe in a sovereign Lord of the Universe who is the Creator and Definer of all life and existence, we know that humans can never redefine what God has defined.  Humans can only move dangerously away from the truth.

During the arguments before the Supreme Court, one primary issue that was raised a few times by Justice Kennedy was the issue of whether marriage bestows dignity upon participants.  According to Kennedy's logic, marriage bestows dignity upon individuals and ennobles them. All people deserve dignity, no matter their sexual orientation, and that dignity is protected under the 14th Amendment. Therefore, we must allow homosexual couples to "marry," thereby bestowing dignity upon them.

First, marriage is dignified because at its core, marriage is the bringing together of two profoundly different and complementary individuals to become one, so that synergistically they are more complete together than they ever were apart. Genesis 2:24 says, "Therefore a man shall leave his father and his mother and hold fast to his wife, and they shall become one flesh." It's this unity in diversity that makes marriage the glorious, dignified institution that it is. And our differences extend to the very core of our being, biologically, psychologically, and even spiritually. Our gender is essential to our being. In fact, in heaven, I will not be married, but I will be male. And same-sex couples cannot experience marriage and the dignity that it confers because they are not profoundly different and complementary. They are same-sex, homo--not hetero--sexuals. As Kevin DeYoung said,


The promotion and legal recognition of homosexual unions is not in the interest of the common good. That may sound benighted, if not bigoted. But we must say it in love: codifying the indistinguishability of gender will not make for the "peace of the city." It rubs against the grain of the universe, and when you rub against the grain of divine design you're bound to get splinters. Or worse. The society which says sex is up to your own definition and the family unit is utterly fungible is not a society that serves its children, its women, or its own long term well being.

Second, and most importantly, marriage is a dignified institution because it was a established by God to picture His relationship with His people. Ephesians 5:31-32 quotes Genesis saying, "'For this reason a man will leave his father and mother and be united to his wife, and the two will become one flesh.' This is a profound mystery-- but I am talking about Christ and the church." So a marriage between a man and woman profoundly pictures the gospel--the good news about Jesus. When a man sacrificially loves his wife, he pictures God's sacrificial love for us. And when a woman lovingly submits to and responds to her husband, she pictures the churches obedience and love to God. Marriage explains the gospel and the gospel explains marriage. And when we distort this by calling something same-sex "marriage" that is not marriage we only muddle people's thinking and diminish the sacredness and dignity of marriage within our culture.

Some have countered that allowing same-sex couples to marry will not take any rights away from heterosexual couples. I suspect that ultimately this will prove to be false, but more importantly this misses the larger point: When we call something "marriage" that in reality is not marriage this will inevitably lead to the erosion of the institution of marriage in our culture, and thus the erosion of a central picture of God's relationship to His people. And so our entire culture will be spiritually hurt and further bankrupted by this muddled thinking. This is why Isaiah 5:20 says, "Woe to those who call evil good and good evil, who put darkness for light and light for darkness, who put bitter for sweet and sweet for bitter!"


Some will condemn the things that I am saying as hateful and prejudiced, but that's not my heart.  In fact, if what I'm saying is true (and I believe it is), then that means that the most loving thing we can do is lovingly stand up for the truth. Those who have put their faith in Jesus are not being gracious when they capitulate on the truth. Understand this: grace is only gracious when it is not offered at the expense of the truth. That's why Paul wrote that, "Love does not delight in evil but rejoices with the truth" (1 Cor 13:6). If we really believe in Jesus, then that means that we really believe that He knows what He's talking about, whether He's addressing sexual ethics or any other subject. And so if we have faith in Jesus, then we will agree with Him that homosexual behavior is sinful, deviant, and ultimately leads down a dark path that will rob people of their joy and love. Ultimately, this sin stands in between people and their Creator Who loves them deeply, and if they don't repent they will be separated from God forever. To not tell the truth about this is the opposite of loving.

So for Christians who live in a culture that is increasingly normalizing and institutionalizing sinful behavior, let me offer five suggestions:


Wrestling with any form of a gender identity issue is taxing on a person’s mind, body, and spirit. Struggles with depression, anxiety, hopelessness, isolation, and self-worth are all too common among those who grapple with such feelings. But, as I also know from personal experience, it is possible to struggle with gender identity issues and still live a faithful Christian life. But I have only been able to do that through knowing and experiencing both the love and the truth of Jesus Christ. And the truth is that the homosexual or transgender actions and lifestyles are sinful and God has made his attitude clear on these subjects (See Romans 1:26-27, 1 Corinthians 6:9-11, 1 Timothy 1:8-11, Leviticus 18:22, Leviticus 20:13, Deuteronomy 22:5). Such actions will only lead a person down a dark, dangerous, and sometimes deadly path because they do not line up with God’s intended purposes for sexuality. However, this should not diminish our kindness or affection in any capacity for people struggling with these temptations or even those who live such lifestyles out in the open. Our God and Father in heaven loves them, and because he loves them, he desires for them to be saved and come to a knowledge of the truth (1 Timothy 2:4). By coming to a knowledge of the truth, they may also come to be obedient to his will in order to live a holy and pure life before him (1 Thessalonians 4:3-8). Christians, if we want to love those in the LGBTQ community, we have to both stand for the Truth of God’s Word and offer Grace to those who struggle with or live in that lifestyle. Only then will our love be complete and in line with God’s perfect will.

Let's resolve to love others without compromising the truth. "Love does not delight in evil but rejoices with the truth" (1 Cor 13:6).
Posted by Nathanael King at 2:43 PM