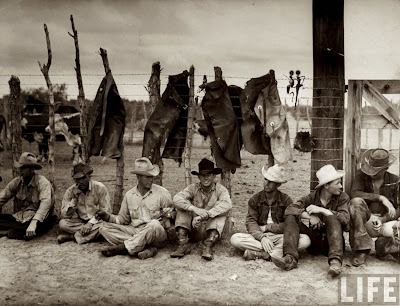 Recently, I've been preparing to teach a class on "Authentic Manhood."  In preparing to teach this, I came across an article by J.D. Gunter on "Men as Providers."  I thought this article was outstanding, and something young men in our culture need continually impressed upon them.  The full text is below, and the PDF is available from the Council on Biblical Manhood and Womanhood.


Christian men are called to provide for their families. Paul uses some of the strongest language in the New Testament to warn those who do not provide: “But if any man does not provide for his own, and especially for those of his household, he has denied the faith and is worse than an unbeliever” (1 Timothy 5:8).

Whatever a man thinks he is “called” to, this much is clear – he is called to provide for his family. One of the most God-glorifying pictures of the gospel is when a man puts his childhood dreams to the side, steps up to the plate, gets a job, and valiantly cares for his family. This man should be honored and his work should be appreciated.

Something about growing up and having a family changes the perspective of a man. Instead of a professional athlete, he aims for management. Instead of a multi-platinum record deal, he pursues health insurance. Instead of wanting to be a famous astronaut, he dreams of raising one. This is maturity. This is growing up. This is a man dying to self and living for another.

One of the saddest pictures of gospel-confusion is when a man fails to pursue providing for his family because he is stuck chasing the clouds of his youth. Scripture commands men to give themselves up for their wives, just as Christ gave Himself up for the Church (Eph 5:25). When a man stubbornly refuses to get a job that will support his family or, worse still, when he obligates his wife to provide in his stead because he is entitled to “chase his dreams” or “pursue his calling,” the Bible gives us reason to doubt that man’s faith. Unbelievers intuitively know this is wrong. The conscience of the redeemed condemns it too.

Men should be free to chase their dreams. Great companies were founded, churches planted, and institutions established by men who worked a full-time job, then spent their free-time in a garage, in front of a computer, or in a classroom. These men are heroes. They did not ask their wives or families to carry them into their dreams – they walked there themselves. They held their dreams loosely enough that they would not sacrifice their families to achieve them.

Is it ever legitimate for a wife to work? Yes, of course. We are thankful when a wife comes alongside her husband to support him in his call to provide. However, this does not relieve him of his responsibility. He is ultimately accountable for the provision of his family; not his wife.

When a wife helps to support the family, the husband has delegated his call to provide for the family to his wife. This role should never put undue pressure or hardship on her. When a husband pressures his wife into the workplace and away from the home for any reason, he has ceased to delegate and begun to abdicate.

How do you know if you have put undue burden on your wife and despised the God-given call to provide? Ask yourself:

1) How would you feel if your wife unexpectedly got pregnant and you were forced to be  the only and primary breadwinner for your family? Rejoicing or regretting your spoiled plans?

2) How do you use your time? Are you working as hard as you can to provide adequately for your family?

3) Are you dependent upon your wife’s income to support your lifestyle or could you live more modestly and reduce the pressure on her to work?

4) Most importantly, does she trust you as the provider of the home?

A Call to Provide

If your wife is willing and able to come alongside you to help you provide for your household, rejoice in that, but do not feel entitled.

This truth is not meant to shame men who struggle to provide. On the contrary, there is tremendous honor for that man who struggles to provide. I have known men to work three meager-paying jobs to humbly support a wife and children. Men have toiled away for years working faithfully in what the world would never see as a dream job. In the face of great uncertainty, men take what jobs they can find and spend little as they feed, clothe and provide for their kids.

Some would call this a failure. Some would say that man’s life is ill-spent. He is not chasing his dreams, he is not “called” to this grueling work, and he will never find true fulfillment in this life.

This man is not a failure. His work is not something to be ashamed of. This man is a conquering hero. His bravery is to be applauded. His tenacity is to be admired. His steadfastness is to be emulated. Here we have a warrior who will provide for his family in the face of incredible odds and overwhelming hardship.

The working man understands that a call to marriage is a call to provide. He will not quietly stand by while his family suffers. He will not chase his childhood dreams on the backs of his wife and children. He will struggle, he will provide, and the Lord will honor him for being a picture of Christ who, though he was in the form of God, did not count equality with God a thing to be grasped, but made himself nothing, taking the form of a servant (Phil 2:6-7).

The world is confused about the intrinsic nobility of work, and some of that confusion seeps into the Church. We should know better.  Scripture commands, “Whatever you do, work heartily, as for the Lord and not for men, knowing that from the Lord you will receive the inheritance as your reward. You are serving the Lord Christ” (Colossians 3:23-24). If you have a job, welcome to the ministry! You are serving the Lord.

The businessman, the mechanic, the salesman, the lawyer, the teacher, the waiter, and the landscaper are all in direct service to Christ. On top of that, the men who hold these jobs to provide for their families are fulfilling a biblical mandate. There is honor and goodness in work. God’s glory is glimpsed each time a man brings home a paycheck. A man coming home to play with his kids after an exhausting day of work has shown us what Christlikeness is.

Our intuition tells us something is wrong when a man does not provide for his family. Our conscience pricks us when we hear of a woman paying her husband’s way. Our hearts break when we see a man who selfishly refuses a job because it does not align with his dreams while his wife and kids suffer. We are not alone in condemning this man. Scripture condemns him too. He is worse than an unbeliever.