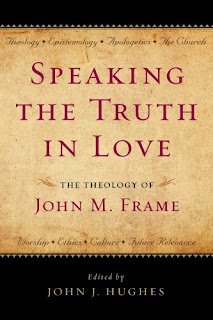 In response to the question, “What advice would you offer to theological students and young theologians as they face a lifetime of theological work?”, John Frame gives the following 30 (!) point answer.  I think this is great advice for both aspiring theologians and anyone thinking of going into ministry.
HT:  Joseph Torres
This interview can be found in the book, Speaking the Truth in Love:  The Theology of John M. Frame in the chapter, "Reflections of a Lifetime Theologian:  An Extended Interview with John M. Frame,” where Frame is interviewed by P. Andrew Sandlin.
Posted by Nathanael King at 5:21 PM